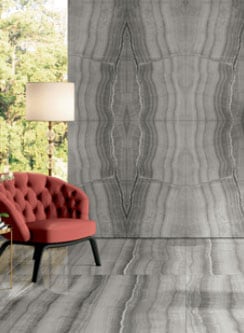 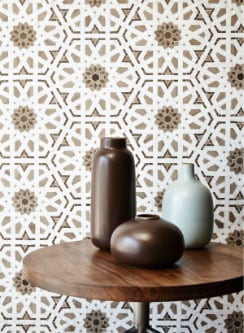 The Pasadena Showcase House of Design is a long-standing tradition going back to 1965. The premise came about as The Pasadena Junior Philharmonic Committee’s annual benefit. Each year, the nonprofit chooses a home, and designers and sponsors work together to create an amazing masterpiece. It’s become a way to raise funds for music programs. This year’s house is the Locke House, originally constructed in 1937 by Hollywood society architect Gerald R. Colcord. “I wanted to be very respectful of the home’s architecture. It’s very segmented, like a maze. It felt very old Hollywood, and I want to pay tribute to that but also usher in some contemporary Hollywood flair,” Jhoiey said. The showcase of the master bath is the tiled wall behind the soaking tub. Jhoiey chose Walker Zanger’s Tahiti pattern, a porcelain tile that’s 24” x 48”. With a tile this size, you have full, large leaves that create a magical retreat.

The bronze tub sits on a pedestal before the wall looking inviting and regal. Because of the step, Jhoiey added lighting, something that’s become her signature touch. It turns the area into somewhat of a stage. A Modern Shower with Timeless Accents

The master bath also features a very modern shower that even has a touchscreen to control the water, lighting and more. Instead of a traditional curb to prevent flooding, Jhoiey built a bench to cover the main drain and a trench to filter water.

Again, she added lighting to the trench. She used a Walker Zanger Secolo porcelain slab for the shower that mimics the look of marble because it’s a more robust material. It’s nonporous, unlike marble, and it’s not slippery, something that’s crucial in a shower. The Bathroom Vanity: Innovation in a Small Space

The vanity was moved in the design, as it was previously where the botanical tile wall is now. She expanded the area to allow for more counter space, which also created more angles. With a creative mindset, Jhoiey had a plan. She chose a mirror that opened up the space but wasn’t so large that it diminished the elegance.

The sink faucet is actually to the right of the sink. It’s certainly an interesting design feature, but she came up with the idea because building code doesn’t allow a faucet to be directly underneath a window. For the countertop material, she again used Secolo slab. The Master Bedroom: Merging of Aesthetics

Jhoiey’s inspirations for both rooms was about dichotomy. “I wanted to mix traditional and modern, masculine and feminine, and glamour and relaxation,” she said. The master bedroom is a master class on this.

The room is bathed in similar greens of the botanical tile and has a world of visual interest without being too busy. Again, this wasn’t an enormous space, so there were design decisions made to conserve space, like built-ins. The platform bed incorporates lighting at the bottom. Fabric panels that Jhoiey’s studio printed make up the headboard. Handpainted leaves sit in angled frames on the ceiling. The colors and angles bring both spaces together, as do the accents of the slab. Secolo slab is a background for the industrial nightlights above the nightstands. It’s again a play on the two different sides to the spaces. The room also has a fireplace, and the mantle uses the same slab. It’s easy to see the true connection between both rooms.

Due to the current pandemic, the home won’t be open for in-person tours. However, an interactive virtual tour will be made available. It will be premiering mid-October. Visit the Pasadena Showcase House website to learn more.